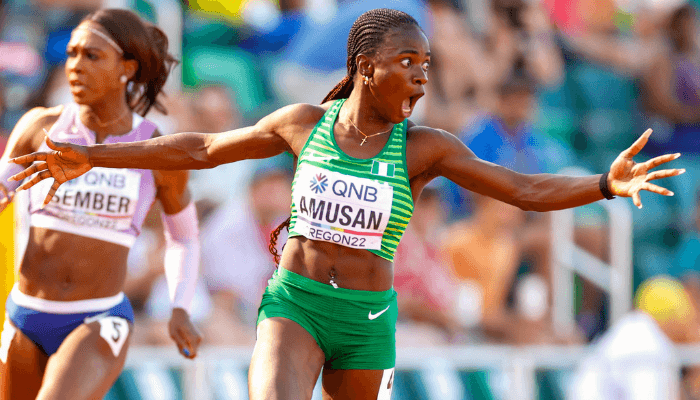 For writing Nigeria’s name in the history books by setting a new 100m hurdles world record at 12.12 seconds and emerging continental, Commonwealth and world champion in the sport in 2022, Oluwatobiloba Ayomide Amusan (OON) is the LEADERSHIP Person of the Year 2022

Year 2022 has been a stellar one for Oluwatobiloba Ayomide Amusan: she became the first and only Nigerian athlete in history to complete a grand slam of titles at the continental, Commonwealth and world levels by winning gold at the 22nd African Athletics Championship in Mauritius, World Athletics Championship in Oregon, USA, and Commonwealth Games in Birmingham, United Kingdom.

Amusan entered the 2022 World Athletics Championships in Oregun, USA, as a medal contender after back-to-back fourth-place finishes. In the heats she ran an African record of 12.40s, bettering her old record by 0.01s. In the semifinal, she set a new world record of 12.12s and bested her time once again in the final, running 12.06s (wind-assisted, thus not a legal world record), becoming the first Nigerian world champion at the World Athletics Championships.

Amusan, who along with Ese Brume was conferred with the national honours of Officer of the Order of the Niger (OON) by President Muhammadu Buhari for their feats in the championships, wrapped up her long and successful 2022 campaign by competing in the 100m hurdles at the Zürich Diamond League final event, which she won in 12.29s to retain her title. She finished ahead of Lolo Jones, Britany Anderson, and Camacho-Quinn in fourth, setting a new meet record.

In describing her stellar season and year 2022 in one word, the world champion said, “God is faithful.”

Indeed, God has been faithful to “Tobi Express”, the last child of three siblings. Born on April 23, 1997, in Ijebu Ode to two school teachers, she scaled through life’s hurdles to become a global superstar.

Tobi Amusan has indeed cemented her place in history as the greatest Nigerian athlete of all time (at least for now) as she is Nigeria’s first-ever world record holder, world champion, back-to-back Commonwealth Games champion and Diamond League champion.

She is a worthy winner of the LEADERSHIP Person of the Year 2022 award.