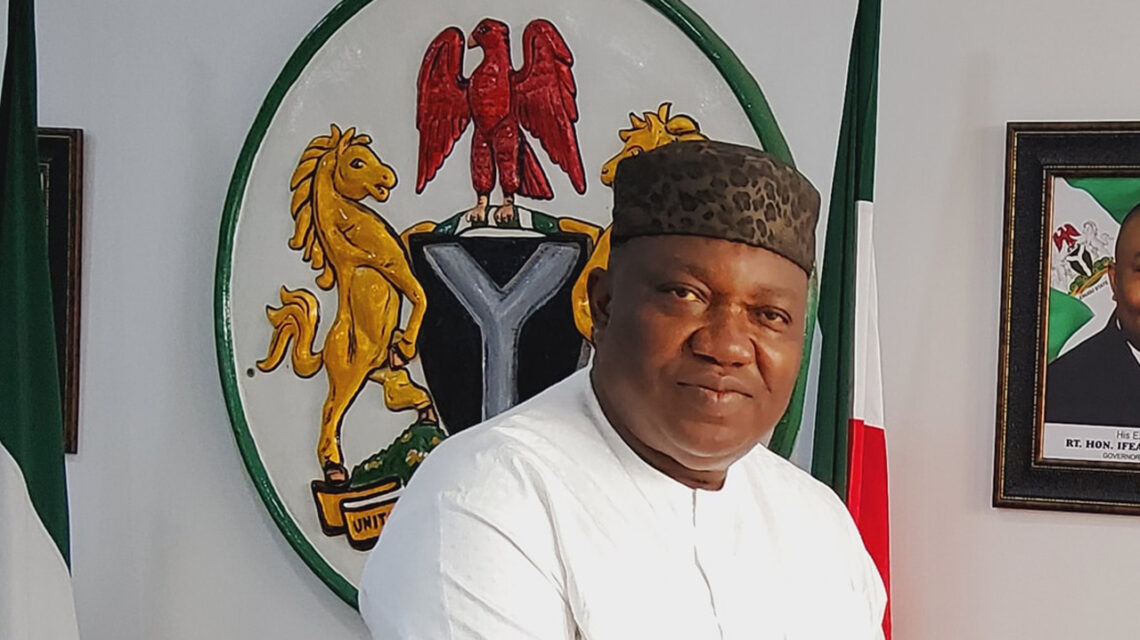 For taking infrastructural development to the hinterlands of Enugu State previously overlooked, Governor Ifeanyi Ugwuanyi is the LEADERSHIP Governor of the Year 2022

Enugu State governor Lawrence Ifeanyi Ugwuanyi was born on March 20, 1964, to parents who hailed from Orba in the present Udenu local government area of the state.

Popularly called “Gburugburu” due to his principle of carrying people along, Ugwuanyi attended the prestigious St. Teresa’s College, Nsukka, from where he gained admission into the University of Nigeria, Nsukka (UNN). He obtained a B.Sc. degree in Finance and M.Sc. degree in Marketing (Public Relations) at UNN.

Governor Ugwuanyi equally holds an MBA degree in Finance and another MBA degree in Accountancy from Enugu State University of Science and Technology (ESUT).

He rose through the business and political circles to attain lofty heights that today stand him out as one of the most popular governors in the country.  He was elected governor of Enugu State on the platform of the Peoples Democratic Party (PDP) in April 2015. He was sworn in on May 29, 2015.

Following his leadership qualities that endeared him to his people, he was sworn in as the governor of Enugu State for a second tenure on May 29, 2019.

Before becoming governor, Ugwuanyi was a three-term member of the House of Representatives, serving for 12 years in the Green Chamber of the National Assembly where he represented Igbo-Eze North/Udenu Federal Constituency.

Despite the economic challenges facing the country, Ugwuanyi has proven his leadership prowess following the way he has been managing the state as a governor.  Though the past governors since 1999 had focused on urban development, Governor Ugwuanyi turned his attention to rural development to give rural dwellers a sense of belonging.

That is why it was not surprising that the people of Enugu State overwhelmingly re–elected him in 2019 with an unprecedented 95.54 per cent of the votes cast, the highest margin of victory in the nation’s electoral history.

Ugwuanyi is regarded by many as the unsung hero of infrastructure, as he has continued with his aggressive execution of legacy projects — projects that impact directly on the people.

Some of these projects include the completion of the Udenu Ring Road which had been a death trap for the people of Ezimo and Imilike-Ani. The completion of this road has opened up these towns to the outside world for business and other transactions; the Abakpa Nike Lake Flyover which has addressed traffic gridlocks at  Abakpa T-Junction–Harmony Estate Road–Amorji Nike–Adoration Pilgrimage Centre, Phase II and III, in Enugu East LGA; the asphalting of a 22.443 km (13.945 mile) inter-community link road – the Neke-Mbu-Ogbodu Aba-Obollo-Etiti road – that connects Isi-Uzo and Udenu LGA, under the Rural Access and Mobility Project II (RAMP II); rehabilitation of numerous internal roads in the university town of Nsukka and the flood routing/erosion control works at Achi Street, Independence Layout, Enugu, among others.

Ugwuanyi’s administration has covered about 700 kilometres of urban and rural roads largely concentrated in the rural areas.

Concerned about the health and wellbeing of the rural dwellers, Governor Ugwuanyi has renovated district hospitals and constructed healthcare facilities such as Type 3 Healthcare centres, and cottage hospitals with isolation wings in the rural areas to provide adequate and affordable healthcare services to the people.

Besides the ongoing massive construction works at the permanent site of Enugu State University of Science and Technology (ESUT) Teaching Hospital, the State University of Medical and Applied Sciences (SUMAS), Igbo-Eno, a multi-billion-naira project, is about to begin operations. Governor Ugwuanyi’s administration also rehabilitated the former Colliery Hospital, Enugu, with the construction of new structures, and transformed it to Enugu State Infectious Disease Hospital, for isolation and treatment of patients with infectious diseases.

In Education, Governor Ugwuanyi’s administration has recruited 5,030 primary school teachers under the Enugu State Universal Basic Education Board (ENSUBEB) and over 2,000 secondary school teachers under the Post-Primary Schools Management Board (PPSMB). His administration has constructed, renovated and equipped 1,255 classroom blocks and other school projects and procured and distributed over 50,000 classroom furniture and other learning tools for primary school children and their teachers.

Governor Ugwuanyi’s administration has so far supplied and installed computers in 209 secondary schools and science equipment in 294 secondary schools; constructed and renovated classroom blocks, offices and hostels, among others.

The story is the same in the state-owned tertiary institutions. For instance, the Institute of Management and Technology (IMT), Enugu, which is now a degree-awarding institution, courtesy of Ugwuanyi’s administration, has witnessed massive infrastructural transformation through construction of multiple landmark projects.

These projects include a block of 15 ultra-modern classrooms on two suspended floors with seating capacity of 1,224 students; a block of ultra-modern offices for Registry Division (Exams and Records) with accommodation for a minimum of 75 staff members; a block of fully furnished ultra-modern Academic Staff Office complex comprising 60 offices with intercom facility; and a world-class Medical Centre with all necessary appurtenances for provision of quality medical services to staff and students of IMT, Enugu. On Ugwuanyi’s watch, IMT, Enugu, held its first convocation in 11 years.

Another of Governor Ugwuanyi’s legacy projects is the ultra-modern 5,000-seat capacity Township Stadium, Nsukka, aimed at promoting and encouraging grassroots sports development and youth empowerment. A similar befitting Township Stadium in Oji River local government area was captured in the 2022 budget and work is ongoing.

The stepping down of 30MVA in Nsukka from the 132KV Makurdi feeder, which his administration facilitated to improve the quality of electricity supply in the area, is one of the state government’s greatest achievements.

The 30MVA Injection Sub-Station in Nsukka was the programme of the National Integrated Power Project (NIPP) but received maximum support from Ugwuanyi’s administration which provided sundry assistance such as resolution of all legal issues concerning the project, among others. This project will address the perennial electricity challenge in the Nsukka axis of Enugu State that had been experiencing low voltage power in the past.

Unlike the story of governors who embark on physical projects at the expense of the welfare of the state’s workforce, Enugu on Ugwuanyi’s watch is on the list of the few states that pay the N30,000 new minimum wage to their workers with the consequential adjustment.  According to BudgIT, Enugu is one of the three states in the federation that have fulfilled obligations to their workers.

And though Enugu State has yet to be recognised as an oil-producing state, under the astute management of Governor Ugwuanyi it was rated among the six economically most viable states in the country. It was also rated as the second most advanced state in Nigeria on the Ease of Doing Business by the World Bank Group, and among the seven states that are solvent with an impressive over 30 per cent internally generated revenue (IGR) to fund additional economic activities, among others.

Also, due to the peaceful disposition of Governor Ifeanyi Ugwuanyi, the Correspondents’ Chapel of the Nigeria Union of Journalists (NUJ), Enugu State Council, conferred on him the award of the “Most Peaceful Governor in Nigeria.”

Last month, precisely October 2022, the governor added another feather to his cap when he was honoured with the prestigious Commander of the Order of the Niger (CON).