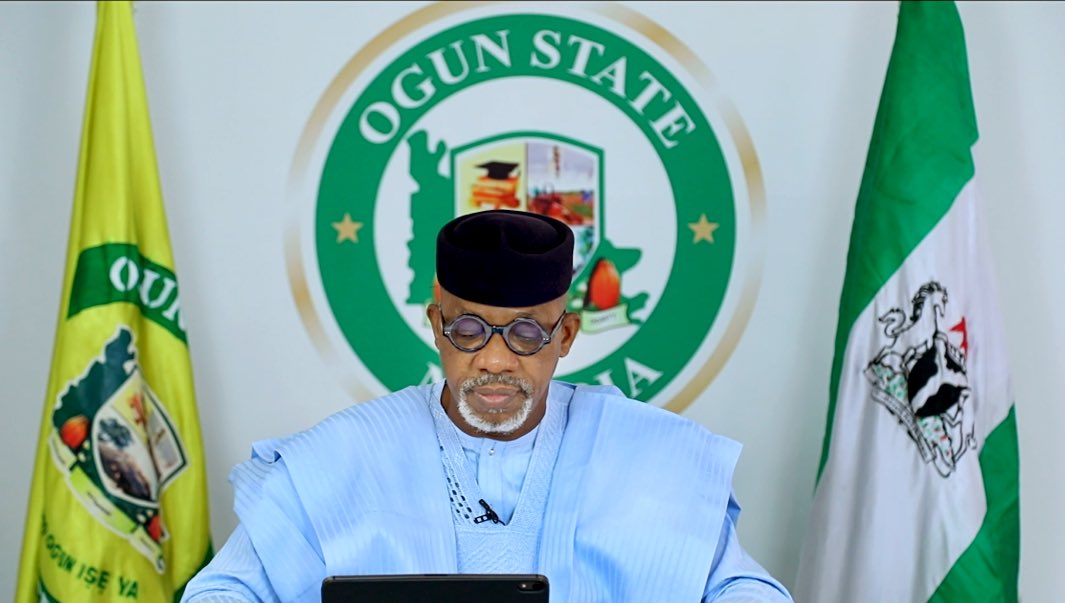 For maintaining a steady pace of development through execution of people-oriented projects across Ogun State, resisting the temptations of abandoning uncompleted projects initiated by his predecessor who did everything possible to thwart his ambition; for keeping all his electioneering promises as encompassed in the ISEYA and ensuring adequate security and peaceful coexistence among all ethnic groups across the state, Prince Adedapo Abiodun is the LEADERSHIP Governor of the Year 2022

It is widely acknowledged that the essence of government is to ensure accountability, transparency, responsiveness, rule of law, stability, equity, inclusiveness, empowerment and broad-based participation, among others. Good governance, on the other hand, entails the degree at which it delivers on the promise of human rights including civil, cultural, economic, political and social rights. Governor Abiodun has been able to achieve all these since he assumed office on May 29, 2019. Most citizens of the state say they are particularly delighted with the way he swiftly responded to issues of security, especially the Fulani herdsmen crisis that threatened the peaceful coexistence of the multi-ethnic state, as well as unemployment and micro-economic challenges.

Abiodun hinged his plans to develop Ogun on five focal points, which he christened “ISEYA”, with the theme, “Building Our Future Together”. ISEYA, a Yoruba phrase for “the work is ready”, was carefully coined to consistently remind every member of his administration that his style of governance would not be business as usual.

The governor mounted the leadership saddle with genuine desire to develop the state in such a way that government impacts positively on not only the elite but also the common man in the rural area. In the bid to realise his dream for a better Ogun, Abiodun’s ISEYA acronym represents his areas of focus: (I) Infrastructure, (S) Social Welfare and Wellbeing, (E) Education, (Y) Youth Empowerment and (A) Agriculture.

Abiodun’s infrastructural investments across Ogun State since 2019 have always been people-oriented and transformational, with immense multiplier effects on the socio-economic development of the entire citizenry in the state. His accomplishment in this regard includes the construction and rehabilitation of over 80 roads totalling about 400 kilometres across Ogun. And by the year 2022, his administration executed more kilometres of roads in just three and half years, more than any other administration in the state since it was created.

The benefits of the reconstruction of the roads by the Abiodun administration are not limited to the people and residents of Ogun State, but to all Nigerians who travel on the federal highway corridors that transverse the state. A typical example of this was the total reconstruction of the Ijebu-Ode-Mojoda-Epe road. The road is targeted at decongesting traffic on the ever-busy Lagos-Ibadan expressway. And so, travellers/motorists from the eastern part of Nigeria needed not to ply the Sagamu interchange of the Lagos–Ibadan expressway again before linking Lagos State by Epe–Victoria Island.

Other areas of infrastructural projects undertaken by the Abiodun administration include the construction of an Aerotropolis, an airport city anchored by the agro-cargo international airport; the multi-modal transportation system that is now fully operational with the intra-city wifi-enabled air-conditioned mass transit buses.

Work is equally ongoing on the Ogun Digital Infrastructure project which seeks to provide internet connectivity across the state. This digital economy infrastructure is the backbone for ICT revolution in Ogun State.

There is also the multi-dimensional development agenda that encompasses health, housing, security, water supply and women empowerment under the social welfare and wellbeing strategic pillar which has improved the status of the state in various spheres. A typical example is the provision of qualitative health care service delivery through huge investments in renovation of over 100 primary health care centres; the massive enrolment of community members for Basic Health Care Provision Fund (BHCPF) under the administration’s “ILERA DERO” health initiative.

Also, the notable investment in the upgrade of facilities and equipment at the state-owned Olabisi Onabanjo University Teaching Hospital (OOUTH) towards making it a world-class healthcare centre for medical education and research is worth mentioning: it has led to the renovation and equipping of the state general hospitals and the recruitment, regular payment and promotion of medical officers, resident doctors, nurses, pharmacists and other healthcare professionals in various cadres.

Abiodun’s feat in the provision of affordable houses is more than the total housing units built by previous administrations since the creation of the state in 1976. Under the scheme meant to deliver 2,500 housing units in phases, the Abiodun administration constructed 1,500 units of housing estates across the three senatorial districts of the state.

In furtherance of his social contract with the people of the state, Governor Abiodun established the Ogun State Security Trust Fund, which provides security patrol vehicles equipped with state-of-the-art gadgets to all the law enforcement agencies, including the Amotekun security outfit. This initiative, which was aimed at complementing the existing security architecture, has however earned Ogun State the status of one of the safest states in Nigeria where investors and citizens of Nigeria can live, work and play.

The Abiodun administration is the first and only state government to have assembled five northern governors to the Government House to assess the level of peaceful inter-ethnic coexistence in Ogun State. In February 2021 when the farmers/herders crisis was tensed, Abiodun invited five governors — Abubakar Atiku Bagudu of Kebbi State, Abdulahi Umar Ganduje of Kano State, Abubakar Sanni Bello of Niger State and Bello Mohammed Matawalle of Zamfara State — to a security meeting with a view to finding a lasting solution to the clashes. That was after he had led security chiefs and some members of the state executive council (SEC) to some areas in the state that witnessed killings by suspected herdsmen.

The governor eventually set up a security task force and equipped it with the necessary facilities to quell crises anywhere in the state.

The Abiodun government’s investments in the social wellbeing of the people of the state include the MSMEs, which birthed the thrift system called “Ok’owo Dapo” where over N1billion was distributed by his administration as grant to boost the operations of micro, small and medium-scale enterprises under the Nigeria for Women Project.

In education, the state under Abiodun maintains an enviable status as the education capital of Nigeria. He never reneged in consolidating on this legacy, particularly with an unwavering investments including in the renovation and construction of no fewer than 956 blocks of classrooms and other facilities in public schools.

Children in the special needs schools across the state are also not left out, as the Abiodun administration distributed over 25, 000 tables and chairs to public primary and secondary schools as well as wheelchairs and white canes to students living with disability. The state government also introduced OgunTEACh, an intervention programme aimed at employing about 5,000 interns to fill the teacher vacancies in primary, secondary and technical colleges.

As part of efforts to motivate the teachers, Governor Abiodun also cleared the backlog of promotion of teachers for the year 2016 and 2017, even as he approved the promotion of teachers that were due in 2019 and 2020. Since then, the governor has not relented in regular payment of salaries and allowances to teaching and non-teaching staff as well as prompt and regular payment of subventions to state-owned tertiary institutions.

Governor Abiodun went ahead to appoint 108 new secondary school principals to manage the state’s public secondary schools. All these have earned the governor various awards such as the Best Education-Friendly Governor by the South-West wing of the All Nigeria Confederation of Principals of Secondary Schools (ANCOPSS) and the Best Governor in the education sector by the National Parents Teachers Association.

Similarly, youths in the state are given opportunities to flourish and possibly be part of the administration. The governor has provided the youths with empowerment and employment opportunities, including the establishment of the Centre for Innovation, Science, Technology, Engineering and Mathematics (STEM); the Ogun Tech Hub, which provides infrastructural support for local innovators and incubation opportunities for tech-based start-ups; the Ogun Youth Empowerment Scheme (OG-YES), aimed at providing paid training and job opportunities for targeted 10, 000 artisans annually, among others.

The dream of the Abiodun administration of engaging in agriculture for industrial growth is gradually becoming a reality with the recent ground-breaking of the Special Agro-Industrial Processing Zone (SAPZ) located within the Remo Economic Industrial Cluster in Sagamu and Ikenne local government areas of the state. This initiative is geared towards supporting smallholder farmers and other value-chain actors for an increased agricultural productivity.