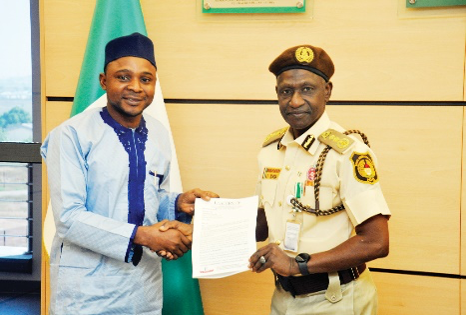 The Comptroller -General, Nigeria Immigration Service (NIS) Isah Idris Jere, has described the LEADERSHIP Public Service Person award bestowed on him as a landmark history and an achievement for him and the service. Jere said the Service would save the award in its institutional archive. The Immigration boss who expressed appreciation to LEADERSHIP for the opportunity to be a part of its noble history said, the recognition further points to the fact that hard work pays.

“For me, this is an act of encouragement, kindness and generosity. It will further motivate me to work harder, attain more heights and hopefully, press harder to eliminate the challenges of effective border policing and all other related issues,” he said.

A visibly elated Jere spoke when he received the letter of nomination presented to him by the Group Managing Director, LEADERSHIP, Muazu Elazeh, yesterday. He said, “For me, LEADERSHIP has earned a pride of place in my mind because it has continued to set a standard for journalism practice. This award will remain indelible in the heart of the Nigeria Immigration Service, and my family.

“While it is often said that to whom much is given, much is expected, I want to promise that we will do more exploits to prove that your choice is right. I want to categorically say that this cherished award also extends to my officers and men who execute the reforms my administration introduced.”

Earlier, the group managing director of LEADERSHIP Group, Muazu Elazeh, who led the delegation to formally present the nomination letter to Comptroller Jere said his nomination was in recognition of the enduring reforms he is implementing at the NIS.

Elazeh explained that the award was meant only for distinguished Nigerians who standout in their various fields of endeavours noting that Jere clinched the award based on his laudable achievements and result oriented reforms at the NIS as justified by his track records. “You have proven by your glaring records that you are a strategist, a dynamic leader and a project and result executor,” he said. Elazeh, who further described Jere as a visioner who has a very good understanding of his mandate said, “Today, the totality of your efforts has given the NIS a face it can hold onto and a pride of place.”

The GMD, who was conducted round the NIS technology building for- an- on- the spot assessment, lauded the CG for successfully migrating all passport offices in the country to enhance electronic passport platforms in three geo-political zones, as well as in London and the US passport offices within six months.