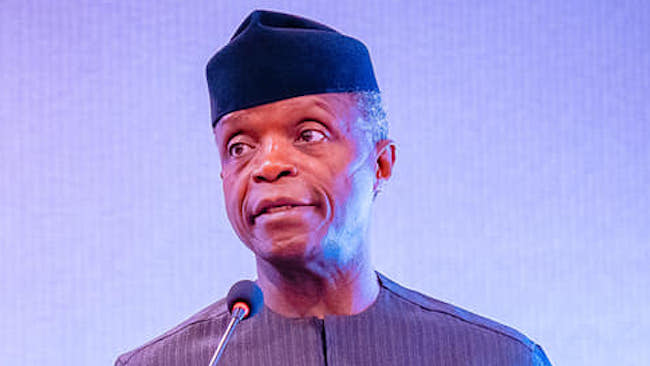 The Vice President, Prof. Yemi Osinbajo, SAN, has described his award as LEADERSHIP Person of the Year 2021, as a great honour, adding that he had always seen public office as an opportunity to serve.

I am humbled, Osinbajo said, that my modest contributions under the leadership of President Muhammadu Buhari is being acknowledged and motivated to do even more.

The Vice President made this remark in Lagos on Sunday at the presidential wing of the Murtala Muhammed Airport, when the management of LEADERSHIP Group Ltd led by its Senior Vice Chairman and Editor-In-Chief, Mr. Azu Ishiekwene, presented him with the letter of nomination as LEADERSHIP Person of the Year 202I.

Osinbajo praised the role the founder of LEADERSHIP, Mr. Sam Nda-Isaiah, played in the formation of the All Progressives Congress (APC) and the struggle for democracy and urged the newspaper to keep up the vision of its late founder for a united and prosperous country.

He said he looked forward to receiving the award on Tuesday, May 17, 2022, at the International Conference Centre, Abuja.

This award means a lot to me, especially at this time, the Vice President who has declared his interest to contest for the Presidency in 2023 said.

Mr. Ishiekwene, while presenting the letter, said the Vice President was chosen for his significant role in stabilising the country, especially during what has been a difficult period for all.

The Director-General of the World Trade Organisation (WTO), Dr. Ngozi Okonjo-Iweala, is a joint winner of the LEADERSHIP Person of the Year 2021, with 20 other winners in other categories.

The Award and Conference, which would be marked along with the 60th posthumous birthday of the Founder, Sam Nda-Isaiah, is themed: Resetting Nigeria – Culture, Politics, Geography and The Role of Big Ideas.

NNPC Achieved This By Teamwork – Kyari

NNPC Achieved This By Teamwork - Kyari