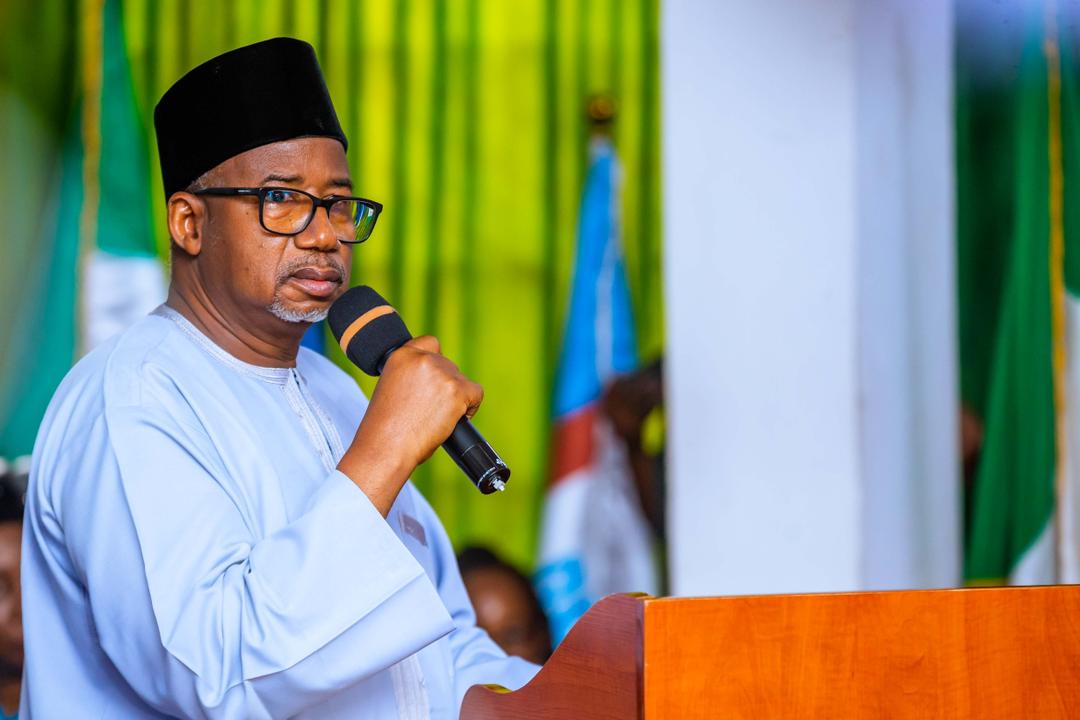 For his ability to keep his state safe and secure in the midst of rising insecurity in the North; for introducing policies and programmes to ensure that Bauchi State is spared the gory tales emanating from the nefarious activities of terrorists and bandits, including home-grown security solutions, youth empowerment and infrastructural development, Bala Mohammed is LEADERSHIP Governor of the Year 2021

The primary role of government is protection of life and property. In Nigeria, however, this primary responsibility has seemed herculean: most governments seem unable to fulfil this mandate especially in the North where insecurity has become endemic. It is common to hear of banditry and terror attacks in almost all states in the North, but not in Bala Mohammed’s Bauchi. The governor, rather than throw up his hands in the air and wait for the federal government, developed a home-grown solution that has served the state well and warded off marauders from wreaking havoc on his compatriots. The secret? He assembled and registered 10,000 hunters from across the state’s 20 local government areas to help other security agencies in fighting banditry, kidnapping and other crimes in the state.

This programme achieves two things: apart from tackling criminals, it is also providing youths with employment to reduce restiveness. For, as the saying goes, the idle brain is the devil’s workshop.

Working in collaboration with security agencies, the registered hunters carry out routine patrols in every nook and cranny of the state and dislodge suspected bandits’ camps in the bush. In this way, the people of Bauchi are largely spared attacks, intimidation, or harassment by criminal gangs.

The hunters not only provide intelligence to security agencies, they engage with and chase off the suspected bandits from their camps, arrest them and hand them to the security forces.

While other governors are still awaiting the outcome of the debate over the contentious issue of state police, the Bauchi governor has installed a community policing system that has made Bauchi arguably the safest state in the insecurity-endemic region.
For his part, Governor Bala Mohammed has continually supported the vigilante group with the necessary incentives, tools and logistics to facilitate their work of keeping Bauchi safe.

The governor started a youth empowerment programme for 20,000 youths across all the LGAs of the state as part of his administration’s effort to end restiveness and thuggery in the state. The governor also distributed 1,000 commercial tricycles (Keke) as well as 251 buses to youths in the states. All these are targeted at keeping them engaged in productive activities.
Governor Bala Mohammed is one person who understands very well that investing in education is investing in the future. And that is why he gives special attention to the sector. While many governors fail to access UBEC funding for primary schools due to the counterpart funding requirement, the Bauchi governor secured N5bn from UBEC.

Some of his laudable policies and innovations in the sector include conversion of boarding schools to merit schools, zero-hunger policy in boarding schools, harmonised scheme of work, dual school system where boarding schools host day students as well, admission based strictly on merit, adoption of phonics, reclaiming of public schools from private users, performance-based promotion of staff, reward and punishment, centralised admissions into schools, etc., payment of JAMB registration for 3,812 SS3 students, intensive inspection of schools, payment of all outstanding WAEC debts, payment of all outstanding regular scholarship allowances, establishment of database on schools, staff and students, Manual and biometric capturing of staff punctuality, acquisition of equipment of new chalk factory and training of staff

On environmental management, Governor Bala Mohammed launched a special environmental sanitation exercise in Bauchi as part of his administration’s effort to keep the state clean. There was disinfection of wells, the first time it was done in the state, to fight vectors of malaria and other diseases. And as part of his administration’s commitment to tackle environmental challenges — drought, desertification, erosion and floods etc. — the governor flagged off a tree-planting campaign with the theme “Planting For Reclamation Programme”, to reverse environmental degradation.

In the health sector, Governor Bala Mohammed, in collaboration with SDGs, donated six ambulances to the General Hospital, Darazo; Garin N’a Allah PHC Centre, Gobiya PHC, Udubo Maternity, and Mashema PHC to ease the transportation of patients from rural areas to the cities.

To shore up the funding for health, he also approved a standing order for the release of monthly 5 per  cent of internally generated revenue and 1 per cent of all Local Government Area Subvention of Bauchi State Health Trust Fund.

This is in addition to the construction and renovation of primary health centres and other health facilities in the state.

The Bala Mohammed administration has also left indelible footprints in the infrastructural development of Bauchi State. The projects include the N8 billion road linking Alkaleri and Tafawa Balewa LGAs of Bauchi, which benefit about eight communities from Yalwan Duguri to Badaran Dutse, Birim-Bajama to Kumbala, and Kundak Wurno to Burga villages

Aside from that, the government has awarded contracts for 16 projects through the Bauchi State office of the Sustainable Development Goals (SDGs) as part of its development projects in some rural areas of the state.

Some other projects executed by the governor are the construction of two roads worth N1billion in Azare — General Hospital Road to Jama’are, Azare bypass, and Tafawa Balewa Road to Jama’are, and Shira roads in Azare as part of the urban renewal by the administration, and N3billion road for Sade to Akuyam road linking Darazo and Misau LGAs.

While many governors seem to relent in their second term, Bala Mohammed shows no sign of slowing down. In the last two years, the governor has recorded over 100 projects and programmes, most of them completed. They include construction/renovation/dualisation of over 50 roads, six electrification projects in six local government areas, construction/renovation of over 10 primary schools and 10 health facilities, mostly primary health centres. Also, about seven palaces were renovated. He also provided 50 operational vehicles to the security agencies in the state, among other interventions.