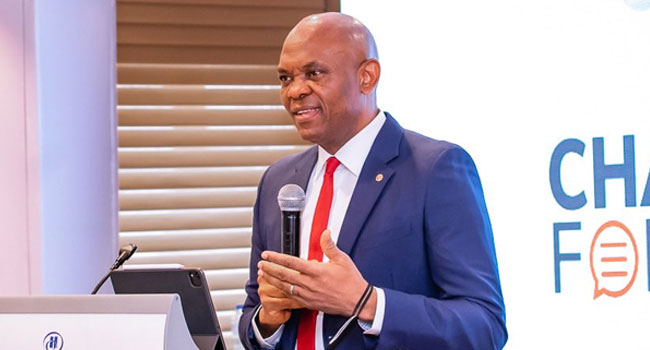 For grooming a generation of African entrepreneurs through the Tony Elumelu Foundation (TEF) and subsequently catalysing economic growth, driving poverty, eradicating and ensuring job creation on the continent, Tony Onyemaechi Elumelu is LEADERSHIP Business Person of the Year 2021 Elumelu is one of Nigeria’s well-known actors in the private sector. A consummate businessman and boardroom player who believes in not just working hard but also working smart, he grew from a humble beginning as a copier salesman to one of the best-known business names in Nigeria and, indeed, in Africa.

Through his Foundation, The Tony Elumelu Foundation (TEF), Tony, as he is fondly called by peers, is acting on his firm belief that the private sector’s role is critical for Africa’s development. This, he insists, is hinged on the economic philosophy of Africapitalism which simply translates to the doctrine that “the African private sector has the power to transform the continent through long-term investments, creating both economic prosperity and social wealth In 2015, Elumelu committed $100 million to create 10,000 entrepreneurs across Africa over a period of 10 years through the Tony Elumelu Foundation Entrepreneurship Programme, a pan-African entrepreneurship initiative designed
to empower African entrepreneurs through a multi-year programme of training, funding and mentoring.

In this regard, TEF has empowered in excess of 10,898 young Africans to feel sufficiently challenged to take up the mantle of changing the narrative as far as African economic advancement is concerned. As he always says, the future of Africa belongs to the younger generation who owe themselves a duty to prove that Africa can and will pull itself up from the poverty mentality to a sphere of economic growth that will make the continent one to be reckoned with among the comity of nations.

Being a private sector product himself, he has come to appreciate the critical role that sector is capable of playing in creating social and economic wealth. Even more importantly, and as it concerns the economic development of Africa, he is committed to enabling the younger generation to dare to achieve.
Similarly, through the instrumentality of TEFconnect which exposes young African entrepreneurs to business opportunities beyond the African borders, he has been able to support well over 1,200,000 Africans in 54 countries. He does this by partnering with global development organisations and in the process supporting a drive to impact the economy across Africa.

Elumelu had humble beginnings, just like many other successful people. From a copier salesman to a small bank staff with All States Trust Bank and later to a banker in the real sense of the word, he has become renowned for his philanthropy.
He is an economist by training, an entrepreneur by calling, and a philanthropist by vocation. He is the chairman of Heirs Holdings, the United Bank for Africa, and Transcorp Corporation.

He studied Economics at the Bendel State University (now Ambrose Alli University) for a B.Sc; he added a Master of Science degree in Economics from the University of Lagos. He is also an alumnus of the prestigious Harvard Business School where he honed his skills. Elumelu worked at Union Bank as a youth corps member after which he started his career as a salesman. He subsequently joined the now defunct All States Trust Bank and United Bank for Africa.

He, in 1997, led a small group of investors to take over a struggling Crystal Bank (later renamed Standard Trust Bank). He turned it profitable within a few years and, in 2005, he led one of the largest mergers in the banking sector in sub-Saharan Africa by acquiring United Bank for Africa (UBA). Following the merger of Standard Trust Bank and United Bank for Africa, Elumelu led the company as
group managing director from a single-country banking group to a pan-African bank with subsidiaries in 20 African countries, France, the U.S. and the U.K.

On retirement, he founded Heirs Holdings, an investment holding company which maintains a portfolio of investments across several sectors including diversified investments, banking, financial services, real estate, energy, oil and gas, healthcare, hospitality and insurance. Through Heirs Holdings, Elumelu holds a controlling interest in Transnational Corporation, a diversified conglomerate with
business interests in power, hospitality and energy. In January 2021, Heirs Holdings through its affiliates – Heirs Oil &amp; Gas and Transnational Corporation — announced its acquisition of a 45 per cent operating stake in a permit known as Oil Mining Lease 17 from Shell, Total and ENI in a deal worth more than $1 billion. Elumelu was born in Jos, Plateau State, Nigeria, on March 22, 1963, and hails from Onicha-Ukwu in Aniocha North local government area of Delta State.

LEADERSHIP Awards Will Spur Us To Do More Gov Yahaya, Ned Nwoko