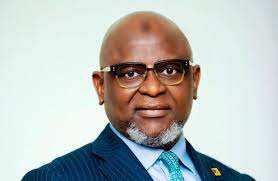 For turning the situation around in a bank that was wallowing in bad debts, introducing various innovations that took banking solutions to unserved hinterlands, thereby creating hundreds of thousands of jobs through agency banking, Dr Adesola Kazeem Adeduntan is LEADERSHIP Banker of the Year 2021

His six-year tenure at the bank has not only seen major milestones for the institution but has also been an eventful one in the history of the bank. Adeduntan’s career in the banking industry started at the defunct Afribank Nigeria Plc (now acquired by Skye Bank) as a graduate trainee where he worked mainly in banking operations.

Of note is his ability to survive boardroom drama that saw him removed from his post as helmsman of the bank and his return just hours afterwards. He had been removed by the board of the bank for no just cause but was reinstated by the CBN governor, who was convinced that Adeduntan had been able to bring stability to the bank.

At the time he came on board as managing director, First Bank was on the verge of collapse with a non performing loan level of more than 18 per cent, way higher than the regulatory 5 per cent, and the bank, at the end of the 2016 financial year, had made a provision for bad loans of up to N226.03 billion, leaving it with a profit of just N12.2 billion.

However, by the end of the 2020 financial year, the bank’s provisioning for bad loans had dropped to N50.5 billion with profits rising to over N75 billion; nonperforming loans (NPLs) declined to less than 8 per cent.

The bank’s drive for financial inclusion under his leadership cannot go unrecognised as it now has the largest agency banking network in the country with over 105,000 Firstmonie agents located across 772 out of the 774 local government areas and the Federal Capital Territory in Nigeria.

Aside creating over 300,000 indirect jobs in the last four years, the Firstmonie agency banking network services over one million unique customers daily, taking banking services to where conventional banks could not reach. Recently under the leadership of Adeduntan, the bank disbursed N100 million in loans though the agency banking network.

Adeduntan has also been able to drive funding as well as capacity building towards small businesses in the country with the First Bank SMEConnect which not only opens up funding but also connects small business owners with mentors, customers, and suppliers while providing adequate business training.