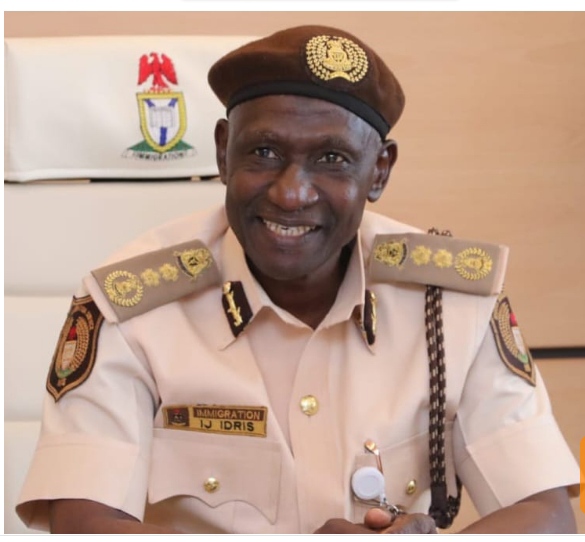 For his humane leadership style and dogged efforts at repositioning the Nigerian Immigration Service (NIS) as one of the best migration management and border security agencies in the world, sometimes disguising himself in order to ascertain the conduct of his officers and men in the field, Isah Jere Idris is the LEADERSHIP Public Service Person of the Year 2022

Since he assumed office as comptroller-general of the Nigerian Immigration Service (NIS), one year ago, Isah Jere Idris has distinguished himself as an outstanding chief executive officer. In 2022 he led NIS on track to win the award of Presidential Enabling Business Environment Council (PEBEC) as the best government agency in complaint resolution for quite a number of consecutive months — April, May, July, August and September.

This year, Idris became one of the first CEOs of federal government agencies to disguise himself in order to ascertain the conduct of his officers and men in the field. In a sting operation, he paid an unscheduled visit to the Alausa and Ikoyi passport offices in Lagos to assess the quality of service delivery to members of the public at the centres. Determined to have a good understanding of the extent of touting in the area, the CGI opted to follow one of the touts to her business centre.

Satisfied with his findings at the Alausa office, he proceeded to the Ikoyi passport centre where the same experience played out. He later left the premises unnoticed and proceeded to the office of the comptroller, Lagos State Command, at Alagbon Close, Ikoyi. At the Command, he was quoted to have said, “The visit was very insightful. It has enabled me to assess the quality of service delivery at the centres, especially against the backdrop of some public complaints about poor service delivery in some passport office locations. We shall use this experience to deepen our reforms very urgently. I have seen some gaps that must be quickly addressed.”

The CG’s findings at the centres paved the way for the consolidation of a series of reforms on the passport platform.

On assumption of office as 17th comptroller-general, Idris promised to deepen passport reform efforts, improve border security efforts as well as emplace measures to enhance staff welfare. He did not disappoint: within six months, he had successfully migrated all the passport offices to enhance electronic passport platforms in three geopolitical zones of the country — South-South, South-East and South-West — as well as the London and U.S. passport offices.

Idris digitised the passport application platforms from application to issuance and also introduced a passport tracking system where the applicants can track their passport processes from their comfort zones.

He introduced a passport appointment system where applicants can go on their appointment dates for capturing. This has reduced overcrowding in passport offices and is now serving as one of the ways of fighting passport racketeering.

The CG made it possible that no Nigerian mission abroad suffers from inadequacy of passport booklets; this was done to save Nigerians in the diaspora from violating the rules of their host countries, because the moment one’s passport expires they violate the country’s rule. This he achieved by dispatching an immediate intervention team to clear the backlog of any country that is reported to have inadequacy, and he has been doing so regularly.

Also, the CGI prioritised e-border management systems. Currently, NIS through its Command and Control Centre, is monitoring all the happenings at Illela land border in real time as a pilot scheme. To ensure internal security, Isah Jere reached an agreement with the National Maritime Administration (NIMASA) to start issuing travel documents to seafarers so as to know who comes in and goes out of the country by sea. There is also an ongoing effort to domesticate the Nigerian Passport; already, a strategic meeting has been held between NIS and Infrastructure Concession Regulatory Commission (ICRC).

In a bid to give migrant smugglers a good fight, the CG constituted and inaugurated the Objects of Smuggling of Migrants Trust Fund Management Board, which represents a significant milestone in his determination to not only combat persons engaged in migrant smuggling but also ensure that victims rescued from migrant smugglers are rehabilitated to continue with their lives.

On Jere’s watch, NIS recognised the increasing public demand for quality service delivery in contemporary times. He has intensified efforts at emplacing structures and processes that ensure prompt, improved and indeed seamless service delivery across the service windows of the agency.

As a result of boosting the morale of men and officers, NIS has this year successfully intercepted 189 boys and girls suspected to be victims of human trafficking at Seme border. And it has been arresting migration culprits.

Mindful of the fact that, as a para-military agency, NIS should be run with high discipline, Jere announced the dismissal of eight workers from the Service and a wide range of sanctions for 18 others found to have committed offences bordering on discipline. He also approved the redeployment of 100 officers from the Lagos airport with immediate effect, while some others have been ordered to face disciplinary procedures to ascertain their level of involvement in some unprofessional conducts and practices reported at the airport recently.

There is however a reward for those who have basically performed well. More than 4,000 officers and men of the service were promoted within one year of his leadership.

In recognition of his patriotism in nation-building under NIS, Isah Jere Idris was recently conferred with the national honours award of Member of the Order of the Federal Republic (MFR) by President Muhammadu Buhari.