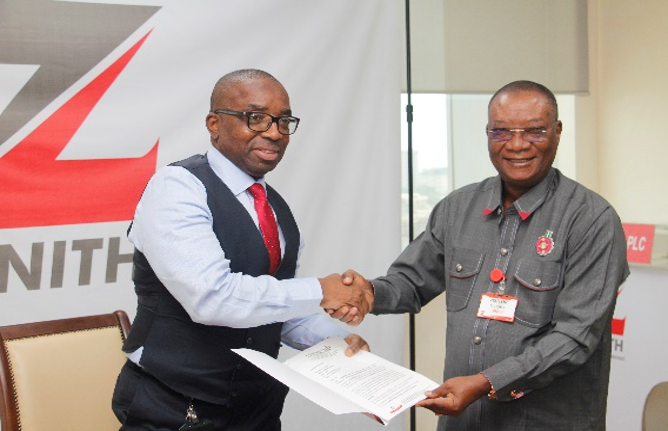 The Group Managing Director/Chief Executive of Zenith Bank Plc, Mr Ebenezer Onyeagwu, emerged LEADERSHIPCEO of the Year 2022.  During the presentation of the nomination letter, the GMD/CEO of Zenith Bank Plc, Mr. Ebenezer Onyeagwu said the award commands respect and honour for the bank. He said, “We thank you for the honour. Thank you for the recognition. We have accepted because we know that you must have had an objective assessment, and we can assure you that we will live up to the respect and the dignity expected of having the award.”

He ascribed the 2022 LEADERSHIP CEO of the Year conferred on him to the founding vision of Zenith Bank ably led by its founder and chairman, Dr. Jim Ovia.

Onyeagwu in the company of all the executive directors of his bank, while receiving the management team ofLEADERSHIP Newspaper Group at its Zenith Bank head office in Lagos, dedicated the award to the efforts of the board of directors, management and staff of Zenith Bank.

The Zenith Bank Group Managing Director who was elated by the visit and the honour of the award of the LEADERSHIP CEO of the year, promised that the bank will continue to uphold the values laid at its foundation whilst innovating to re- main at the top of the Nigerian financial services industry. He commended the management of LEADERSHIP for keeping up with the vision of its founder, the late Sam Nda-Isaiah.

Government Agency of the Year 2022