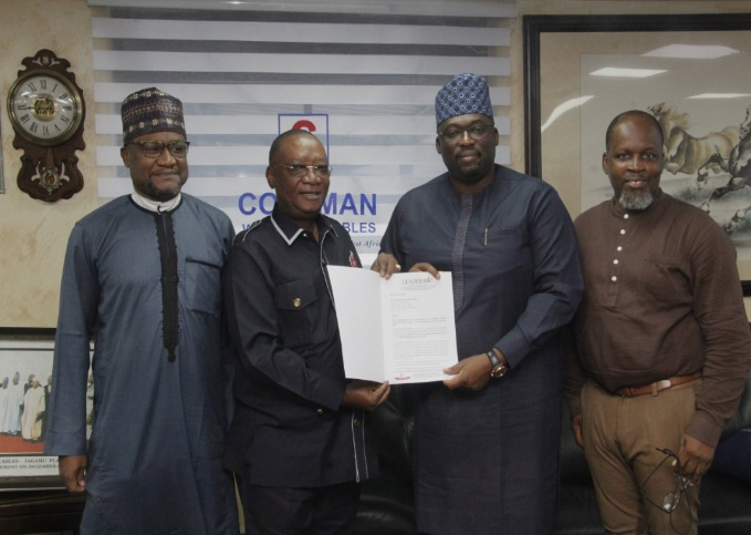 The managing director and chief executive officer, Coleman Technical Industries Ltd, (CTIL), owners of Coleman Wires and Cables, Mr. George Onafowokan has described the company’s LEADERSHIP Brand of the Year 2022 award nomination as a testament to its local content drive in the sub-Saharan African re-gion.While receiving the management of LEADERSHIP Group Limited led by the vice chairman, Mike Okpere at its head office in Arepo, Ogun state, said the award would propel his company to achieve more infrastructural milestone and particularly provide jobs for thousands of Nigerian youths.

The LEADERSHIP team included the executive director, Abraham NdaIsaiah and general manager, southern operations, Chima Akwaja who delivered the official Notification of Award letter for the LEADERSHIP Conference and Awards 2022 ceremony holding in Abuja on January 31, 2023.

Mr. George Onafowokan dedicated the award to the great vision of the company’s board of directors,management and staff of Coleman Wires and Cables for its continuing drive to lead cable industry in Nigeria as well as the number one player in the sub-Saharan African economy.

Onafowokan recognized the need to leverage opportunities to manufacture made in Nigeria goods to deepen export potentials, provide industrial jobs, expand market deliverables and cut down importations of cables and wires from China, Japan and other foreign economies.

This, in his view, has shaped economic growth to drive local content, build local capacity of localized cables and fibre optic manufacturing in Nigeria which Coleman Wires and Cables has become the undisputable leader.

Onafowokan who was elated by his company’s nomination as Brand of the Year by LEADERSHIP, noted that Coleman Wires and Cables as the largest manufacturer of fiberoptics in West Africa, is always ready to support network operators in the telecom industry with highest quality fiber optics to lay terrestrial cables nationwide.

The LEADERSHIP Brand of the Year Award, according to him, is a response for rapid development ofindigenous technology in Nigeria’s economy to boost transmission in the power sector while addressing the challenges of local content and capacity building which he said is being championed by the Nigerian Content Development and Monitoring (NCDMB).

He said, “The LEADERSHIP Brand award is well recognized by Coleman in the areas of building local capacity and driving local content for the country’s industrial sector. We will

be breaking new grounds which will take the project size, build capacity for West Africa, Central Africa andtake 50 percent of the whole African continent”, he stated.

Speaking the company’s plans for next year, he said, “We are geared to make Coleman the biggest fibre optic cable factory in African continent. The synopsis of our business is based on the premise of believing in Nigeria and growing local capacity; building the Nigeria ideology and breaking the barriers,” Onafowokan said.

The vice chairman of LEADERSHIP, Mike Okpere, espoused that the Awards is already in its 14th year, noting that there was indepth research before Coleman Wires and Cables was named the Leadership Brand of the Year which has already been stated in the published materials announcing the awardees.